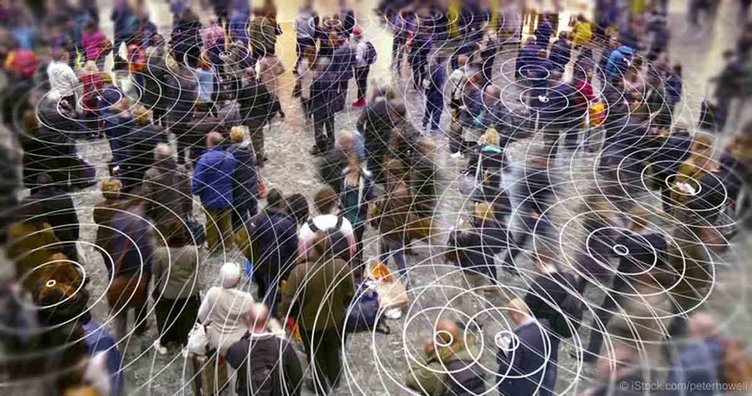 The effects of EMR upon chemical compounds and biological organisms depend both upon the radiation's power and its frequency.

Bioelectromagnetics is the study of the interactions and effects of EM radiation on living organisms. 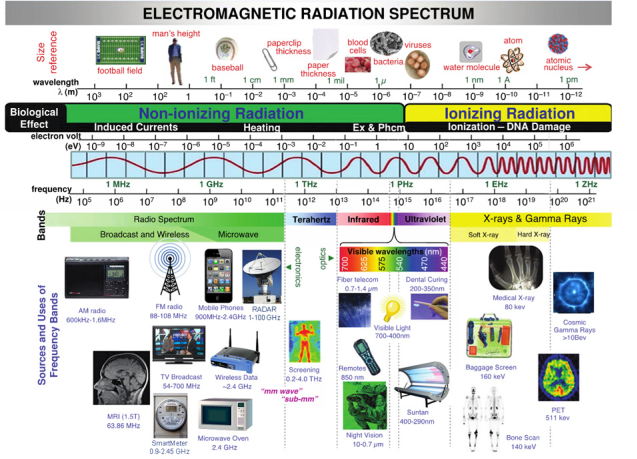 Ionizing radiation includes the higher frequency part of the spectrum: high ultraviolet, X-rays and gamma rays. Within this frequency range, the individual photons of such high frequency have enough energy to ionize molecules, which means to break chemical bonds. These radiations have the ability to cause chemical reactions and damage living cells and DNA. These radiations can be a serious health hazard due to the ability of photons of this radiation to produce ions and free radicals in materials (including living tissue). Yet the properties of these radiations are sometimes used for medical purpose as with chemotherapy, which destroy cells and among them cancerous ones. 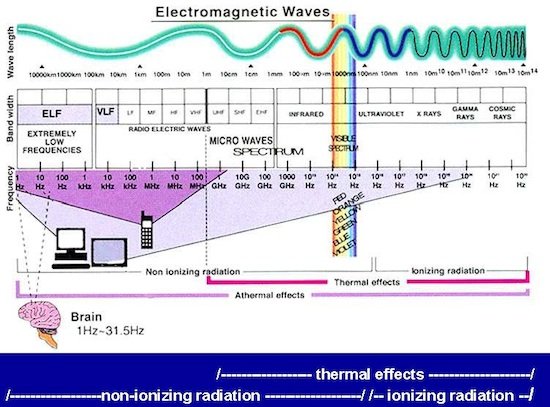 The basic structure of matter involves charged particles bound together. When electromagnetic radiation impinges on matter, it causes the charged particles to oscillate and gain energy. The ultimate fate of this energy depends on the context. It could be immediately re-radiated and appear as scattered, reflected, or transmitted radiation. It may get dissipated into other microscopic motions within the matter, coming to thermal equilibrium and manifesting itself as thermal energy, or even kinetic energy, in the material.

NB: This is why you mustn’t use your computer on your lap!

Heating is the main biological effect of the electromagnetic fields of radiofrequency fields. In microwave ovens this fact is employed to warm up food.

Absorption of energy from the fields can cause tissue to heat up; and more intense fields will produce greater heating. This can lead to biological effects ranging from muscle relaxation to burns. Many nations and regulatory bodies like the International Commission on Non-Ionizing Radiation Protection have established safety guidelines to limit EMF exposure to a non-thermal level. This can be defined as either heating only to the point where the excess heat can be dissipated, or as a fixed increase in temperature not detectable with current instruments like 0.1 °C.

The potential health effects of the very low frequency EMFs surrounding power lines and electrical devices are the subject of on-going research and a significant amount of public debate. The US National Institute for Occupational Safety and Health (NIOSH) and other US government agencies do not consider EMFs a proven health hazard. NIOSH has issued some cautionary advisories but stresses that the data are currently too limited to draw good conclusions. Yet, the interaction between biological material and electromagnetic fields at non-thermal levels are not fully understood.

The body’s electrical activity happens primarily in the cell membrane. It is hugely important that the cell membrane maintain an appropriate “charge” or voltage. A healthy cell has a transmembrane potential of about 80 or 100 millivolts. A cancer cell, for comparison, has a transmembrane potential often as low as 20 or 25 millivolts. When a cell becomes damaged or sick, the voltage of the membrane drops, causing an increased voltage in the interior of the cell. When the membrane voltage is low, the membrane channels can’t function properly, leading to a domino effect of disease-causing actions (or inactions).

Hence even, very low frequency radiation could have a effect on the voltage of our cells.

Exposure to some EMF radiation has been shown to weaken the immune system, stresses the body and damages healthy cells. 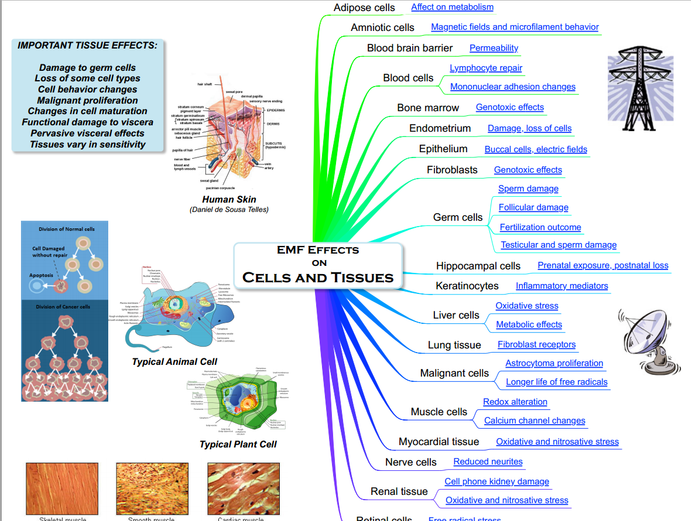 Environmental Health Trust warns of the dangers of electromagnetic radiation, saying it contributes to a person’s toxic body burden. The organization points to research showing that that the protective barrier of the brain — the blood-brain barrier — is compromised due to wireless electromagnetic radiation. Several studies suggest wireless radiation pokes holes in this protective barrier, causing more toxic compounds to reach the brain.

Studies are being conducted to see if cell phone use affects our brains. Even though the EMFs from cell phones are considered low, studies have concluded that there is an effect on the brain. Dr. Nora D. Volkow, a lead researcher with the National Institute on Drug Abuse reported that there are “changes in brain glucose metabolism after cell phone use.” This could cause inflammation in the brain, leading to illness.

“Cells in the body react to EMFs as potentially harmful, just like to other environmental toxins, including heavy metals and toxic chemicals. The DNA in living cells recognizes electromagnetic fields at very low levels of exposure; and produces a biochemical stress response. The scientific evidence tells us that our safety standards are inadequate, and that we must protect ourselves from exposure to EMF due to power lines, cell phones and the like, or risk the known consequences. The science is very strong and we should sit up and pay attention.” 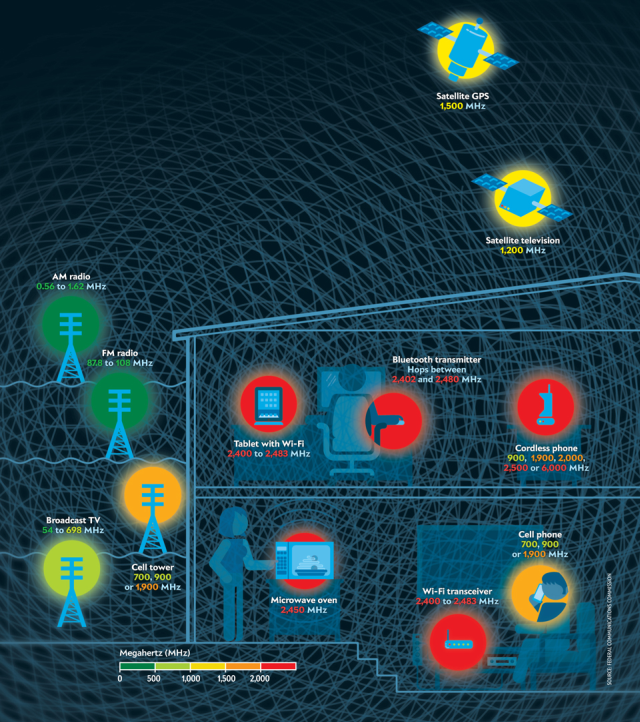 Inside buildings, distortions of the geomagnetic field are detected again and again. Reasons for this are either the use of iron and steel for the ceiling construction or natural (geopathic) fault zones and technical interferences (electro smog).

If a human being spends an extended period of time in a distorted earth magnetic field (sleeping, learning, work area, etc.) adhered biological stress arises, which has a negative effect on cell communication in the human body - the immune system is weakened.

Children or adolescents may be more sensitive to RF field exposure than adults. 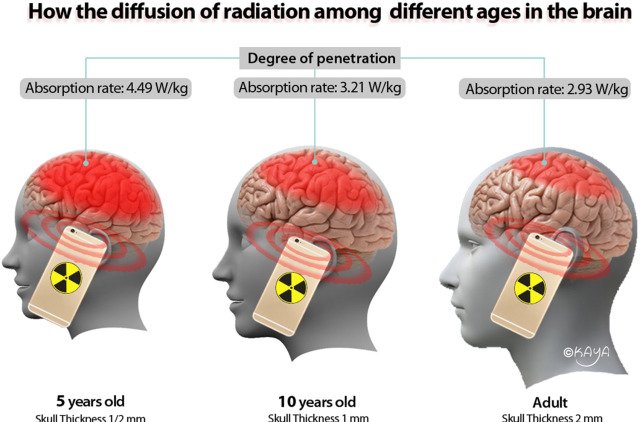 The members of the Russian National Committee on Non-Ionizing Radiation Protection emphasize ultimate urgency to defend children’s health from the influence of the EMF of the mobile communication systems. We appeal to the government authorities, to the entire society to pay closest attention to this coming threat and to take adequate measures in order to prevent negative consequences to the future generation’s health. The children using mobile communication are not able to realize that they subject their brain to the EMF radiation and their health – to the risk. We believe that this risk is not much lower than the risk to the children’s health from tobacco or alcohol. It is our professional obligation not to let damage the children’s health by inactivity.

A strong changing magnetic field can induce electrical currents in conductive tissue such as the brain. Since the magnetic field penetrates tissue, it can be generated outside of the head to induce currents within, causing transcranial magnetic stimulation (TMS). These currents depolarize neurons in a selected part of the brain, leading to changes in the patterns of neural activity. This was previously used in electrochock therapy (ECT = electroconvulsive therapy).

“Physiological effects have been observed in a human subject in response to stimulation of the skin with weak electromagnetic fields that are pulsed with certain frequencies near ½ Hz or 2.4 Hz, such as to excite a sensory resonance. Many computer monitors and TV tubes, when displaying pulsed images, emit pulsed electromagnetic fields of sufficient amplitudes to cause such excitation. It is therefore possible to manipulate the nervous system of a subject by pulsing images displayed on a nearby computer monitor or TV set. For the latter, the image pulsing may be imbedded in the program material, or it may be overlaid by modulating a video stream, either as an RF signal or as a video signal. The image displayed on a computer monitor may be pulsed effectively by a simple computer program. For certain monitors, pulsed electromagnetic fields capable of exciting sensory resonances in nearby subjects may be generated even as the displayed images are pulsed with subliminal intensity.”

“As an ex-amateur radio enthusiast and a professional biologist, I do not doubt the value of mobile telecommunications. The ability to communicate easily is what sets us apart from animals; and cell phones are an aid to this. However, as presently configured, their radiation is potentially damaging, both to ourselves and the environment. The main problem is not the microwaves themselves, but the sharp changes in signal strength that occur when they are modulated to carry digital information. These make cell membranes leak and give many unwanted biological effects at signal levels well below current safety guidelines. The good news is that, by involving both biologists and engineers in the necessary research, it should be possible to change the way in which the information is encoded to eliminate most of these effects. The bad news is that the mobile telecommunications industry is not prepared to do this, since it involves admitting that their present systems are unsafe, which could result in damaging litigation. We must find some compromise, or there will be serious consequences for human health and fertility, and the damage to the human genome may be irreparable.”

Electromagnetic hypersensitivity (EHS) is a group of symptoms purportedly caused by exposure to electromagnetic fields. Already 80 years ago (1932), a medical doctor from Germany, Erwin Schliephake recognized EHS. He published scientific data in the German Medical Weekly about his patients that were experiencing unusual symptoms around radio towers. He called this condition “microwave” or “radio wave sickness”. The reported symptoms of EHS include headache, fatigue, stress, sleep disturbances, skin symptoms like prickling, burning sensations and rashes, pain and ache in muscles and many other health problems.

Each person is different and so are their cells. Every person’s cells are affected by electromagnetic radiation but in a different ‘speed’. Here are some of the factors that encourage a faster or stronger reaction to EMF exposures.

•One or more single incident of very strong exposure

•Having other pre-existing health problems

For more information on the health effects due to specific parts of the electromagnetic spectrum, see the following articles: