The EM Spectrum exists naturally, occurring as a part of our natural environment. It should come as no surprise that ancient civilizations and cultures pos¬sessed some knowledge of this naturally occurring “tool”, especially acknowledging the ancients’ intimacy and interdependency with nature.

The ancient cultures of this world are known to have identified and utilized the forces of nature to their benefit, including water, fire, wind, acoustic sound, so how could it be that humankind is only in the past century, ex¬ploiting the waves and frequencies of the EM spectrum for the first time?

Out of ignorance of skillfull erasure, the Western world has positioned itself as the only source of technological knowledge. Yet much research and evidences, often discredited by the academia (erected to maintain Eurocentric ideology), establishes that ancient civilizations from Africa, Asia, the Americas and Europe developed technologies to harness electromagnetic fields. 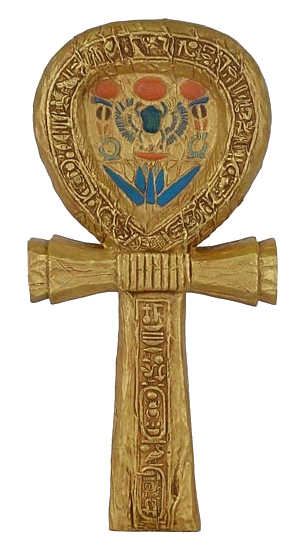 The ankh is a symbol/object/glyph from ancient Egypt often described as meaning or representing eternal life. On temples and scriptures the Neterus (deities) are often pictured holding an ankh.

In the field of Egyptologyt, many researchers are attributing more to it than a divine symbol and some point to the ankh being an electromagnetic device.

This is the case of Edward Leedskalnin, who bases his analysis on the present day TPU or electro magnetic circuit called the 'Toroidal power unit'. The TPU is in fact an infinite loop of magnetism. He also describes the device as an ‘eternal life’ mechanism, as it infinitely produces a magnetic field. 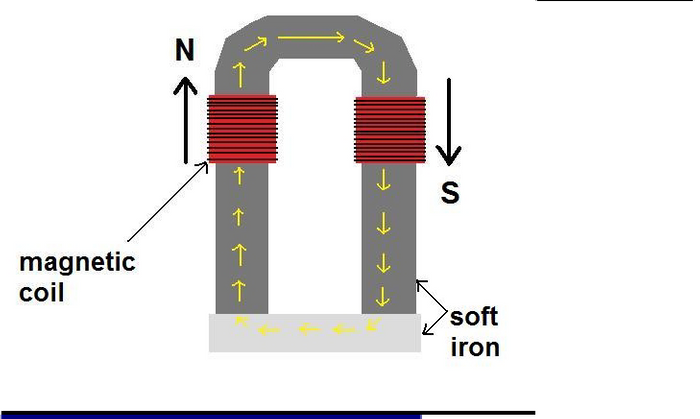 The follwing image is from Khorsabad 8th century BC. 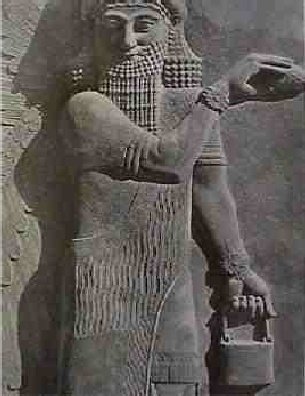 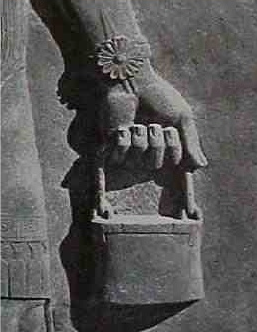 Leedskalnin suggests that the object in his hand is a portable power supply, that is magnetic.

The clue for it being magnetic comes of this next picture which in his opinion clearly shows that the sword is attracted to the object/device. 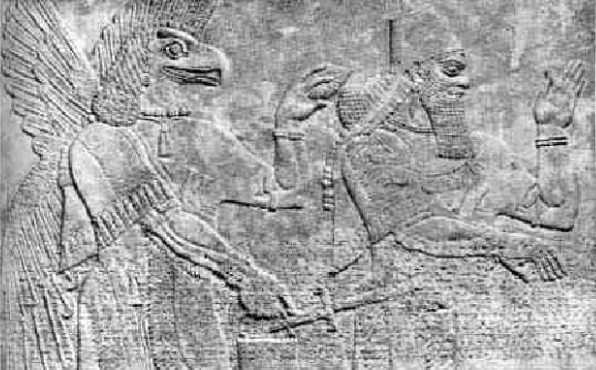 This is how the Babylonians potentially portrayed this device.

The Ancient Egyptians may have depicted it in another way. How did Leedskalnin describe the TPU... an 'eternal life' mechanism. And this is how the Egyptians portrayed eternal life. 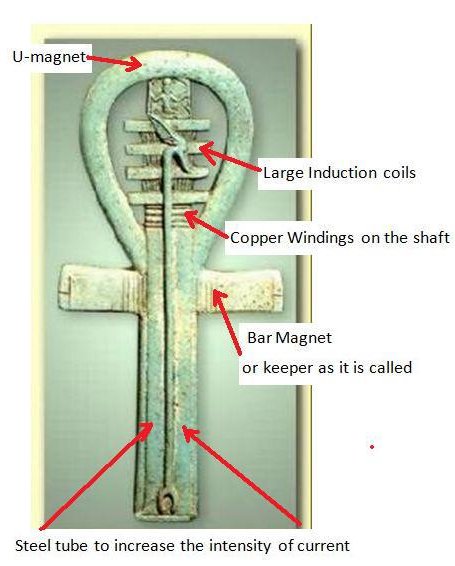 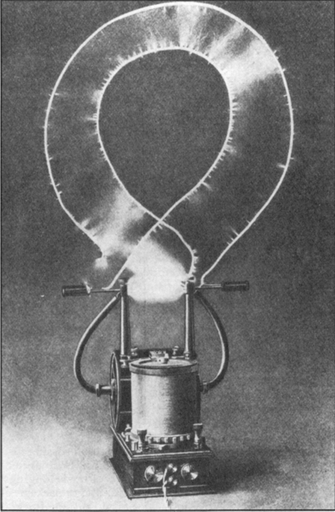 The Djed is another ancient egyptian symbole/object commonly representing a pillar,  that attracted the attention of researcher exploring ancient electromagnetic technologies. 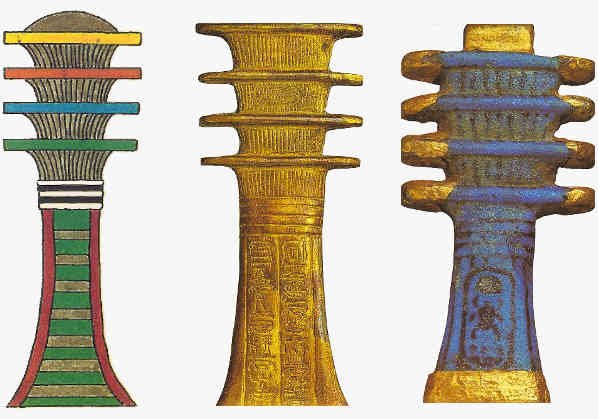 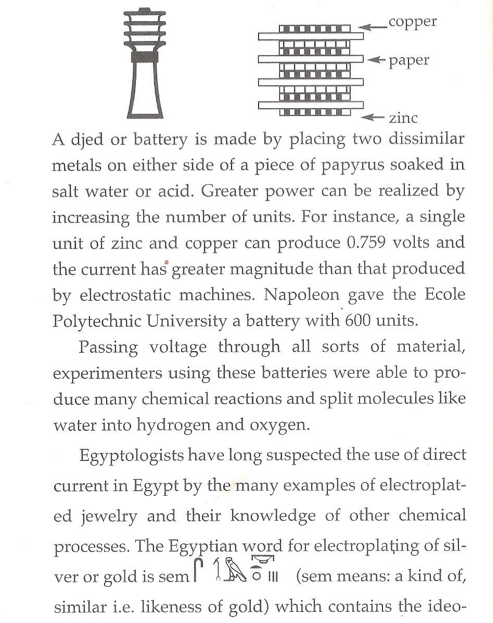 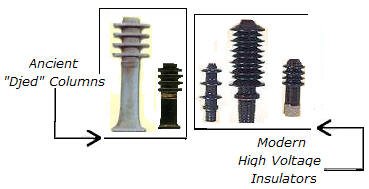 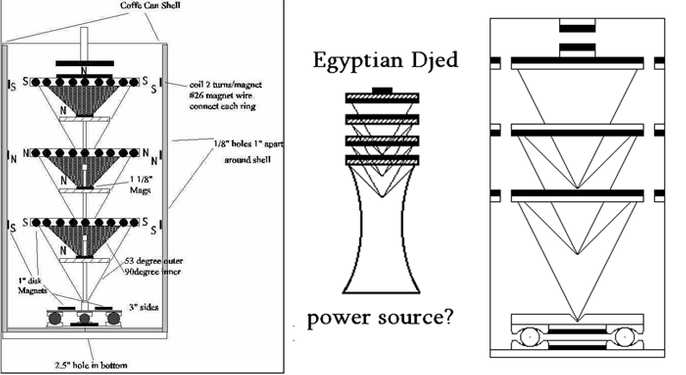 The Dendera light refers to a theory regarding ancient Egyptian electrical lighting technology depicted on three stone reliefs (one single and a double representation) in the Hathor temple at the Dendera Temple complex located in Egypt. 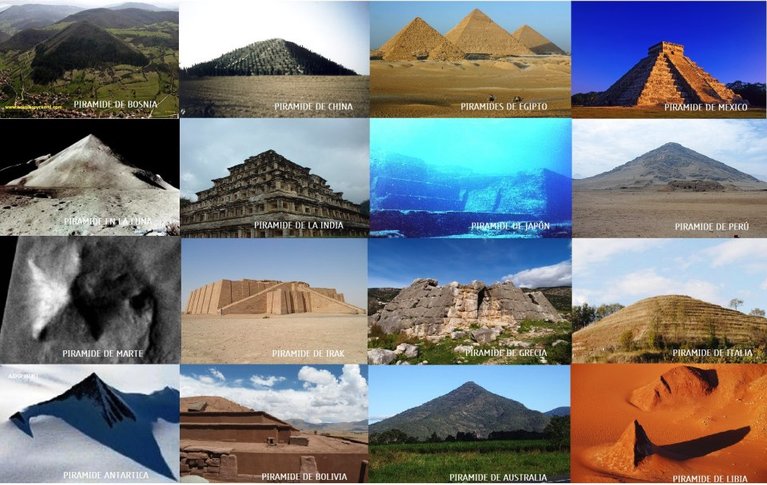 The pyramid is the most powerful shape when it comes to energy. It amplifies existing, natural sources of energy. Recent discoveries in ancient pyramid engineering have suggested that a large number were designed as some form of energy generators by different cultures around the world.

"The very shape of the pyramid is an amplified-receiver or resonator of various kinds of energy fields, i.e. electro-magnetic waves, cosmic rays, electrical discharges, gravitational waves, etc., surrounding our planet and which are in the air around and within the pyramid."

This ancient architecture combined knowledge of geodesy, astronomy, construction engineering, and cosmogony. Architects all around the world had this identical knowledge. It can be seen, for example, in: the Kukulkan pyramid on the Yucatan (Mexico), Mayan Pyramid in Palenque (Mexico), Tikal (Guatemala) and Copan (Honduras), the Pyramid of the Sun and Moon in Teotihuacan (Mexico), and the so-called Cheops and Khafre pyramid at the Giza plateau (Egypt), twenty big Shanshi pyramids (China), the Bosnian pyramids of the Sun and the Moon (Bosnia), and Gunung Padang pyramid in west Java (Indonesia).

Using state-of-the-art scanning equipment, including a Magnetometer and Electrostatic Voltmeter, researcher were able to determine that pyramid location in Serbia had been chosen because of its naturally occurring telluric energy field that pulsed up and into the structure or surrounding area.

What these sites were used for is highly debated, but we now understand that they may have a positive effect on human physiology and greatly enhanced crop seeds.

Some research points to ancient pyramids being a means of generating and perhaps distributing electomagnetic energy within a pyramid complex.

These components appear to be important in the creation, magnification and distribution of telluric fields:

Water, either moving naturally including rivers or cenotes (found at El Castillo at Chichen Itza) or by artificial canals or tunnels, similar to the Temple of Inscription found at Palenque.)

Geo-magnetic fields. Naturally formed telluric fields that have high and low period throughout day and night.

Pyramid design. The specific pyramid shape appears to greatly enhance the telluric fields that pulse up and into the center of the chamber.

Pyramid interior fill. At a number of pyramids, rocks that are good electromagnetic conductors fill the interior of the pyramids and are used to enhance the pulsing field. Rocks that have veins with quartz, granite, and other electrical conducting properties appear to be favored

The artificial construction materials are sandstone blocks (conductivity) and volcanic blocks (the presence of iron as an electromagnetic source). The constructed artificial lakes and channels around the pyramid allow for water flow, releasing negative ions as an energy source and using kinetic energy from the water stream. 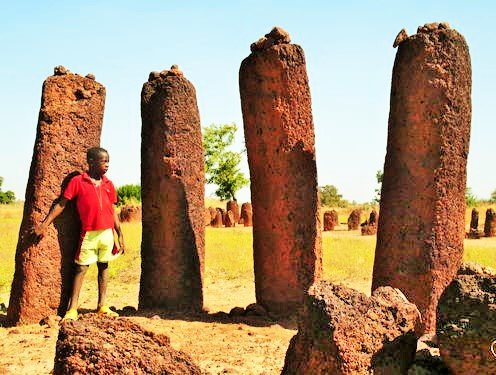 Much research indicates that the megaliths and other ancient structures, such as stone circles, stored and even generate specific energy field, creating an environment where you can enter an altered state of consciousness.

John Burke conducted a study in Avebury in 2005, and published the results in his book “Seed of knowledge. A stone of abundance”.

The electrodes showed that circular ditch breaks the transmission of telluric current on the ground, collects electricity and releases it at the entrance to Avebury. Electromagnetic activity in Avebury decreases at night and increases at dawn.

Burke also found that the Avebury stones are intentionally placed to direct the electromagnetic currents in a certain direction. This is similar to modern atomic particle accelerators in which ions move in one direction.

In his book, Ancient Mysteries, Modern Visions, Callahan discusses research which indicates that the Celtic round towers of Ireland may have been designed, constructed and utilized as huge res¬onant systems for collecting and storing meter-long wavelengths of magnetic and electromagnetic energy coming from the earth and skies. Based on fascinating studies of the forms of insect antenna and their capacity to resonate to micrometer-long electromagnetic waves, Callahan suggests that the Irish round towers (and similarly shaped relig¬ious structures throughout the ancient world) were human-made antennae, which collected and transmitted subtle magnetic radiation from the sun and passed it on to monks meditating in the tower and plants growing around the tower’s base. The round towers were able to function in this way because of their form and also because of their mate¬rials of construction.

Dolmens and megalith structures are energy transmitters and relay stations.

This has a profound effect on the human body, in particular, on dissolved iron in the blood vessels, not to mention the millions of particles of magnetite inside the skull and the pineal gland, which itself is very sensitive to geomagnetic fields, and produces chemical substances Pinole and serotonin, which, in turn, leads to the creation of the hallucinogen DMT.

In conditions, when reduced intensity of the geomagnetic field, people are known to experience extraordinary mental and healing capacities. 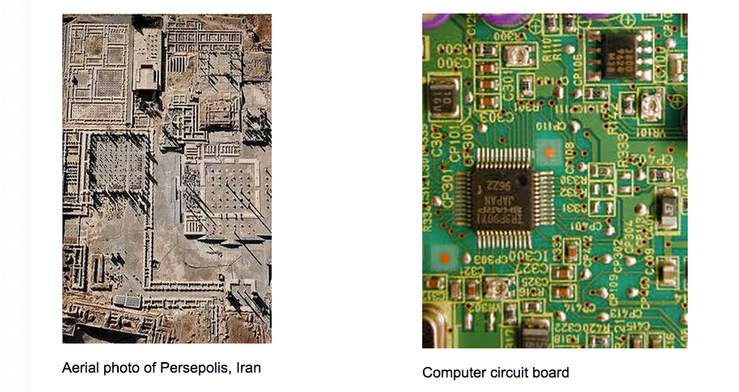 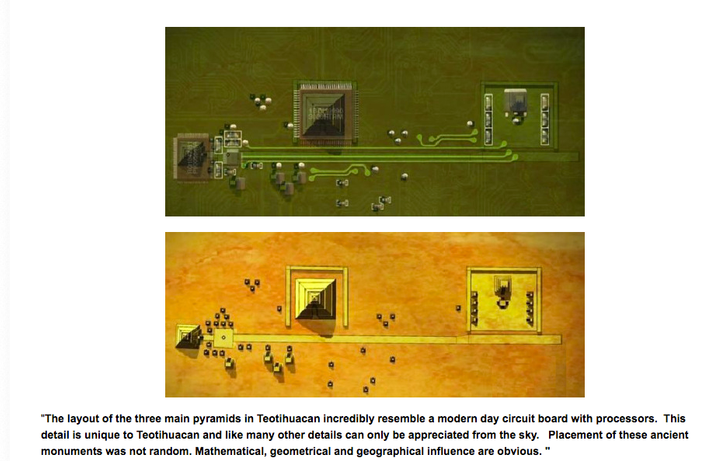 Certainly it can be said that the temple layout seems to strikingly conform to the characteristics of antenna propagation patterns.

“”I design digital wireless networks utilizing the EM Spectrum, transmitters, receivers, modulators and antenna. I also do propagation prediction modeling using powerful computer programs. The program creates a model showing how a location will perform using different antenna, elevation, azimuths and power settings. Sites are chosen based on how well the location propagates a signal.

Again, when I noticed how the land gently dropped away for a great distance from a temple location in Malta, I couldn’t help think how ideal that is for signal propagation when designing sites that can transmit great distances. Is it possible some ancient temple locations were chosen for similar reasons? If the temple location were part of some kind of communications or energy distribution network utilizing the EM Spectrum, I’d say they were.”

Observing what he believes to be power plant plans on ancient tapestry, and microprocessor design in Egyptian temple layout, Slovakian researcher Dr. Pavel Smutny has written, “Maybe it is unusual and surprising, but in orna¬ments on old carpets are woven-in schemes, and principle plans of advanced technologies, which come from vanished cultures and thousands-year-old civilizations. These residues are probably the last ones, which can help revive forgot¬ten, very sophisticated technologies and methods for exploitation of natural electrostatic energy sources.” 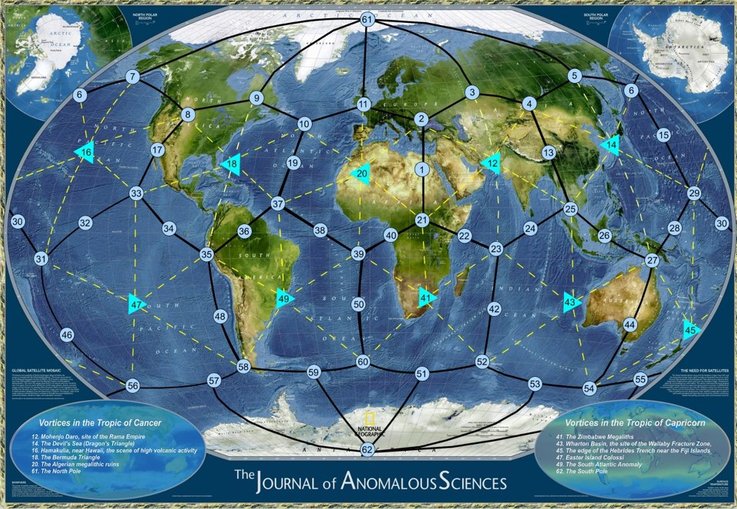 “The world grid” or “The Earth Grid” is the theory that our ancestors purposely constructed their monuments on energy lines that when mapped and connected create a significant pattern, some sort of energy web. The whole idea of the “world grid” is that the Earth is like a huge crystal where the energy flows around it at little nodules. Energy paths intersect and move all over the world.

This construction process on a global scale as if every single culture on our planet felt the need to place monuments such as the Pyramids, the Stonehenge, Teotihuacan and other incredible places in specific locations, to create an electromagnetic network.

The grid around the planet is made of energetic currents, and meeting points of several currents are called vortexes. This is raw energy that can be used for any purpose. Whatever happens on a vortex creates an energy that will spread out onto the grid, and any energetic situation will in turn be mirrored in the physical situations, in the state of the world. This is why we can see that all ancient cultures throughout the world placed their constructions on important points and were doing ceremonies with them, to infuse energy into the planet.